The U.S. lodging industry is expected to increase its spending on capital expenditures to a record $7.05 billion in 2018, besting the 2017 of $6.85 billion. Bjorn Hanson, industry consultant and adjunct professor at the New York University School of Professional Studies Jonathan M. Tisch Center for Hospitality and Tourism, laid out the prognostication in a recent report. While total capex spending is projected to climb 3 percent year over year, the cost per available room for those expenditures will be $1,350, which is the same as in 2017. Capex spending describes "costs incurred with the purchase and installation of capital assets to maintain and enhance hotels," according to Hanson's report. Redesigning a lobby or converting a shower-tub into a walk-in shower, for instance, fall under the purview of capex.

United Airlines is cutting the number of boarding lanes at its gates and will notify passengers through their phones when the boarding process begins. While there are still five numbered boarding groups, passengers now will board through two lanes, green and blue. A digital sign will indicate which group currently is boarding through each lane. Preboarding groups and Group 1 will board through the blue lane, and groups 2 through 5 will board through the green lane in order. From that point, the blue lane will be left open for passengers in groups 1 and 2 who arrive late. The carrier also will issue alerts via its app to let passengers know when boarding for a flight has begun. Eventually, United plans to issue those alerts via text messages, as well.
In addition, United has shifted some boarding group designations to balance the groups' numbers. MileagePlus Premier 1K members have moved from Group 1 to preboarding, and Gold members have moved from Group 2 to Group 1. United has been testing the process at Los Angeles International Airport most of this year, and on Tuesday, it expanded it to more than 1,000 gates around the world.

Airlines Up Fees for Checking Bags 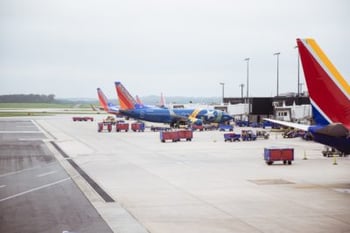 Southwest Airlines is on track to quadruple year over year its number of new corporate contracts in 2018, armed with a bigger and newly structured sales force and a distribution strategy leveraging new capabilities unlocked by its recent reservations system switch, sales executives told BTN.

Over the past year and a half, Southwest's sales team has focused on two areas: "What do we need to do to make it easier for our customers to do business with us?" and, "How do we ramp up our selling capabilities?" senior director of corporate sales Matthew Smith said during an interview at the recent Global Business Travel Association convention in San Diego. In terms of personnel, the corporate sales organization has grown from about 25 to more than 80 over that period, he said. That includes about doubling the sales employees in the field and building up new teams with specific focuses, such as government business.

Nearly two-thirds of travel buyers never allow their travelers to book basic economy fares, according to a survey of 168 travel buyers conducted by the Global Business Travel Association and Airlines Reporting Corp. Additionally, 79 percent hide basic economy fares in their booking tools when travelers are not allowed to use them.
"These fares pose a challenge for travel programs, creating difficulty for spend visibility and comparison shopping when add-ons are factored in," GBTA executive director and COO Michael McCormick said. "Additionally, travel buyers are increasingly factoring in traveler preference and convenience as they recognize the important of their role in employee retention and recruitment in a strong economy with low unemployment."