Global air demand grew 3.8 percent year over year for September, according to the International Air Transport Association, outpacing global capacity, which rose 3.3 percent year over year. Load factor climbed 0.4 percentage point to 81.9 percent, which was a record for the month. Even so, IATA executives said September fell short of the industry's long-run average growth rate of 5.5 percent.

“September marked the eighth consecutive month of below average demand growth," said IATA Director General and CEO Alexandre de Juniac."Given the environment of declining world trade activity and tariff wars, rising political and geopolitical tensions and a slowing global economy, it is difficult to see the trend reversing in the near term.” 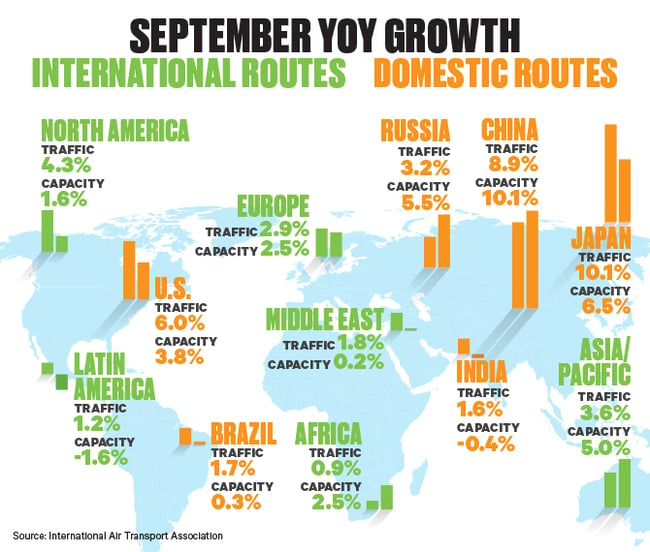 Southwest Airlines will increase its service out of Baltimore and to Hawaii as part of its latest flight schedule announcement. From Baltimore/Washington, Southwest is adding 17 departures "on established and popular routes" for a total of 240 daily departures from the airport in spring 2020. Also in April, Southwest will add daily service between San Diego and both Honolulu and Kahului, boosting its total number of daily flights between California and Hawaii to 28.

Lyft is launching a membership program for frequent riders that offer discounts and benefits for a monthly fee. Priced at about $20 per month, Lyft Pink will give members a 15 percent discount on all rides, priority airport pickups and relaxed cancellation penalties, according to the ride-hailing service. In addition, members will be able to access bike and scooter rides on the platform for free. Lyft opened a waitlist for the program and projects membership will be available across the United States later this year.